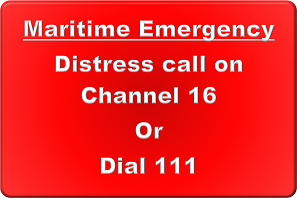 We were just finishing our weekly Monday evening training session – Pharazyn Rescue (Paraparaumu) and K2 Rescue (Waikanae) had just come back ashore and were being washed down, when we were called to join a search for a missing diver down at Makara.
Both boats re-launched and made their way down the coast. Conditions were calm and visibility was good, and after about an hour they arrived and were assigned their tasks. There were many vessels out on the water (our colleagues from Coastguard Mana, the Wellington Maritime Police vessel Lady Elizabeth IV, and a number of private boats). The search had been underway for a number of hours already, so when midnight came, both our boats were stood down to get some rest, ready to resume early the following morning.
Pharazyn Rescue berthed at Mana, to resume searching a few hours later, and her crew was driven back to Paraparaumu by a couple of colleagues from Coastguard Mana. Meanwhile K2 Rescue returned to Waikanae, to provide normal Coastguard cover on the Kapiti Coast. K2 Rescue came ashore just after 1:30am.

A crew drove down to Mana, re-fuelled Pharazyn Rescue and, along with our colleagues from Coastguard Mana, rejoined the search under the on-scene command of Lady Elizabeth IV. Once again there were several agencies involved, and with the daylight there were also many people searching on land. The search continued for several hours until we did a crew rotation at lunchtime – the morning crew returning to Mana, and handing over to a second crew from Kapiti. We were joined by a colleague from Coastguard Mana on Pharazyn Rescue.
As the afternoon continued the conditions deteriorated to the point where Coastguard Mana 2 had to return to base (the conditions were becoming too risky for a RIB of that size). Pharazyn Rescue continued searching south until she was stood down in the early evening and returned to Mana. Our Kapiti crew returned home, ready for another crew to resume the following morning.

Another drive down to Mana, where Pharazyn Rescue and Coastguard Mana 2 re-joined the search in good conditions. Coastguard Mana 2 ran a shoreline search close inshore, with Pharazyn Rescue running alongside, about 100m offshore. The search continued right round as far as Cape Terawhiti, before returning up the coast. As happened on Tuesday, conditions became significantly rougher in the afternoon, and Coastguard Mana 2 was forced to retrace her inshore route back to base. Meanwhile Pharazyn Rescue performed a Creeping Line search back up towards Ohau Point, with significant seas out in the Cook Strait.
By the time we returned to Makara it was getting close to 4pm, and we were stood down. This time we returned Pharazyn Rescue back to base – with more challenging conditions we arrived back around 5:30pm.
Later that evening came the sad announcement that the diver had been found, but hadn’t survived.

This was a major search spanning several days, but sadly there was no happy ending.
Our sympathies go to the young man’s family and friends.